Jarvin Tan, a practicing pharmacist in the Philippines, has found his niche in giving back to the community, volunteering in the Youth for Mental Health Coalition (Y4MH) and soon heading the first Mental Health Advocacy Team of the Philippine Pharmacists Association (PPhA).

Jarvin graduated from the University of the Philippines Manila College of Pharmacy with a five-year undergraduate BS degree in pharmacy. The required pharmacy internship in the Philippines is 960 hours, broken into community, hospital, and manufacturing/industry pharmacy. Often, graduates pursue a medical degree or a career in the United States or Canada. Specializing in a certain area of pharmacy is rare, making Jarvin’s commitment to psychiatry and mental health patients that much more significant.

The Youth for Mental Health Coalition was established in October 2016, and Jarvin joined the team in April 2017. This small group of volunteers has joined lobbying efforts to push for the passage of the Philippines’ first National Mental Health Act and was recognized by the Philippine Department of Health for their support on several key initiatives. These include Suicide Prevention Week, School Caravan, and the National Youth Congress on Mental Health 2017 in celebration of World Mental Health Day. Jarvin also contributes at schools, giving speeches on depression and suicide to increase awareness.

With a focus on engaging adolescents and young adults, suicide prevention has been one aspect of the Youth for Mental Health Coalition’s agenda. Jarvin and his group participated in the Suicide Prevention Run (SuPre Run) last September in commemoration of World Suicide Day. Other advocacy groups, such as MentalHealthPH, also helped organize and set up the event. Since being registered with the Securities & Exchange Commission, the Youth for Mental Health Coalition has been able to partner with the Philippine Department of Health for such events, communicating closely with Dr. Cherylle Gavino who leads the Mental Health Team of the Department of Health under the Disease Prevention & Control Bureau. 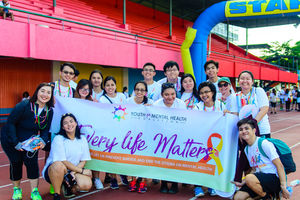 For future opportunities, the Youth for Mental Health Coalition is looking to partner with SPROUT: Speak Out, Reach Out!. Jarvin and his group are hoping to be part of planning a mental health mission in Marawi, a city to the south that was besieged with the Maute terrorists, displacing and traumatizing thousands. Military operations continue to drive the remaining terrorists out of the city, and the mental health needs for this population are evident.

In the Philippines, the practice of pharmacy is not as developed as in North America and the ideal models illustrated in literature. Retail pharmacists in particular are often fulfilling more administrative roles, with a less active role in patient care. For example, patient counseling is rarely done. Instead, pharmacy technicians, or pharmacy assistants as they are more commonly called in the Philippines, do all aspects of prescription dispensing. Jarvin recently co-chaired the Inter-professional Workshop Series for Pharmacists on Mental Health, and has begun advocating for the patient care activities of being a pharmacist. He recognizes the role that patient counseling can play for all patients, particularly those with mental health needs.

The Youth for Mental Health Coalition operates a Facebook page to keep people aware of their upcoming projects and events. Jarvin is responsible for much of photography and videos posted on this account. Additionally, through his own social media accounts, Jarvin gets countless questions from patients and families about psychiatric medications. He recognizes the need for further pharmacist involvement and education to consumers, as he cannot possibly keep up with the questions on his own. Jarvin looks to incorporate additional pharmacists in future mental health missions to help address these gaps in psychiatric medication knowledge.

While Jarvin refers to himself as an “aspiring psychiatric pharmacist” based on a lack of formal mental health training, it is clear he is committed to this population. He has identified ways to help him on his journey, including several psychiatry readings and becoming an active member in CPNP. Jarvin is committed to improving mental health resources and access in the Philippines, and his work is a great example to others throughout the world.