All (100%) residents from reporting programs were able to obtain positions after completing their residency program, with 58% of residents securing employment less than 3 months prior to completion of residency and 20% securing employment after completion of their PGY2 residency year.
The majority (75%) of residents obtained Psychiatric or Neurologic Clinical Pharmacist positions. Positions obtained after residency were primarily in VA Health Care Systems which is consistent with previous years. Nearly half (46%) of positions obtained after residency were in the outpatient clinical setting (Figure 1), whereas in year 2017-2018 this was over 60%. The positions obtained after residency were considered to have a 100% psychiatric focus by all respondents (Figure 2), and the obtainment of a position with this level of psychiatric focus increased considerably from year 2017-2018 (74.6%) and year 2016-2017 (47.9%).
Figure 1. Clinical Settings of Positions Obtained After Residency

Figure 2. Percent of positions obtained after residency with 100% psychiatric focus 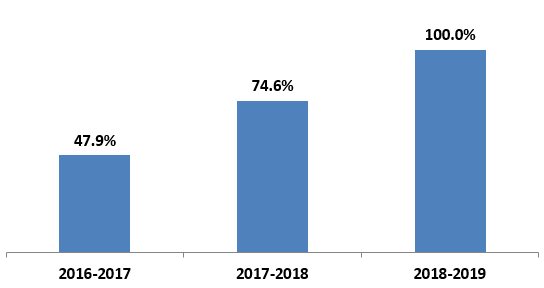 When RPDs were involved in the hiring of applicants for clinical practice or clinical faculty positions in psychiatry/neurology, the top three minimum requirements to qualify as competitive candidates included: completion of a PGY-2 Psychiatric Pharmacy Residency, obtaining the BCPP credential, and clinical work experience (Figure 3).
Figure 3. Percent of RPDs that Consider Listed Qualifications Minimum Requirements for Hiring of Applicants 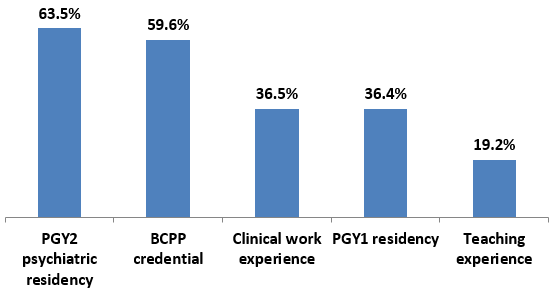 For the 2018-2019 residency year, 90.4% of respondents filled all their residency positions, reflecting an increase from the 2017-2018 residency year (80.7%). Seventy-four positions were recruited for in 2018-2019, and 67 positions were filled through recruitment efforts (Figure 4).
Program directors reported an average of 6.5 applicants per program during 2018-2019 recruitment. A small number of programs (six) participated in the Phase II Match, and those six programs reported their experience with the Phase II Match process as good or excellent. Two programs utilized the Post Match Scramble, each program filling one PGY2 position for the 2018-2019 year through that process. No programs reported having unfilled positions converted to another position (e.g., unfilled PGY2 slot converted to a PGY1).
Aggregate statistics of the Match results from the 2018-2019 residency year are available. These summary statistics on positions filled through early commitment as well as results of positions entering Phase I and Phase II Matches can be found the National Matching Service website, using the following link: https://natmatch.com/ashprmp/stats.html.
Figure 4. Positions available and positions filled in 2018-2019 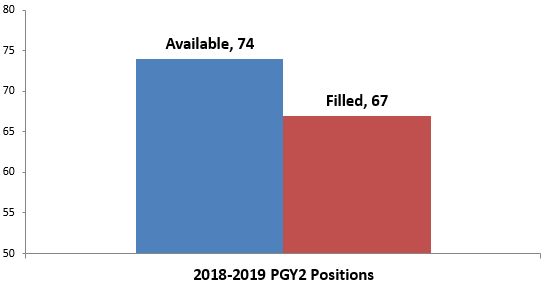 Question 18 inquired about ASHP accreditation status which is depicted in Figure 5.
Figure 5. Plans for ASHP Accreditation 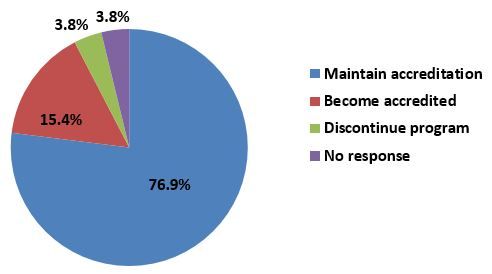 More than half of the residencies (51.9%) currently obtain funding from the VA Health Care System, which is consistent with previous years (Figure 6). No programs anticipated additional funding that would allow them to expand the number of residency positions that they offer.
Figure 6. Residency Program Funding Source 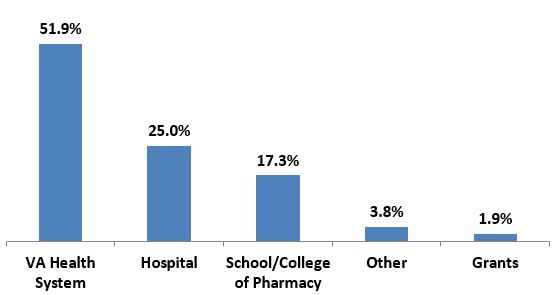 *Note: some RPDs reported multiple sources of funding
The CPNP Resident and New Practitioner Committee appreciates the PGY2 Residency Program Directors who completed this survey, which facilitates the dissemination of important data to the membership regarding PGY2 psychiatric residency training.
AAPP websites use cookies to personalize and enhance your experience. By continuing to use the site, you agree to this collection. Learn more.
25 Years!