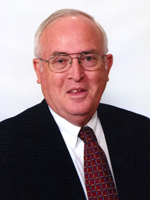 A native of Nebraska, Dr. Wilson received his B.S. in Pharmacy from Creighton University, Omaha, Nebraska in 1971. He then became a staff pharmacist at UNMC, and in 1972 became Director of Pharmacy at the Nebraska Psychiatric Institute located on the campus of UNMC. He received his Doctor of Pharmacy degree from UNMC in 1979. Dr. Wilson became a full time faculty member at UNMC in 1985, and he served as a Clinical Pharmacist at Douglas County Hospital, Department of Psychiatry and Saint Joseph’s Center for Mental Health. He also served as a consultant to Beatrice State Developmental Center in Nebraska and Glenwood State Hospital in Iowa.

Dr. Wilson was a member and then, Chairman of the Lion’s Eye Bank of Nebraska and was instrumental in raising funds and building the Lion’s Eye Research Center in Omaha.

Dr. Wilson has served as member and chairman of several ASHP committees including Chair of Special Interest Group (SIG) on Psychopharmacy Practice. This group began some of the early work that engineered the recognition of psychopharmacy practice as a specialty.

Dr. Wilson is currently a member of the Human Rights and Ethics Committee of ResCare Lincoln, an organization that provides care for the mentally retarded client. He is still active in reviewing patients and their medication regimen once a month.

Dr. Wilson is a founding member of CPNP and has served the College and its precedent forms as treasurer for over 11 years. He has served on several committees through the years.

Dr. Wilson has been married for 33 years to his wife, Paula. They are the parents of two adult children, Natalie Wilson Moynihan and Dr. Nicholas Wilson. Also included in the family is a grandson, Benjamin Moynihan.