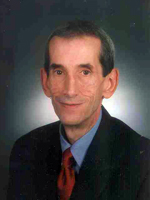 The 2005 recipient of the Judith Saklad Award is Stephen G. Bryant, Pharm.D. Dr. Bryant will present the Saklad Memorial Lecture at the 2005 Annual Meeting in San Diego, California on March 11. The title of his presentation is: Psychiatric Pharmacy Services: Serving Multiple Masters in Complex Times

Stephen G. Bryant, Pharm.D. currently lives in Albany, New York and most recently served as tenured Professor of Pharmacy Practice and Director of Psychiatric Pharmacy Programs at the Albany College of Pharmacy until 2000, at which time he resigned his position due to health-related conditions. Prior to his arrival in Albany, Dr. Bryant was a tenured Professor of Psychiatry & Behavioral Sciences and Pharmacology & Toxicology at The University of Texas Medical Branch at Galveston (UTMB) until 1999. Additionally, he was a Clinical Professor of Pharmacy at The University of Texas at Austin (UTA).

A native New Yorker, Dr. Bryant received his B.S. in Pharmacy from St. John’s University School of Pharmacy and Allied Health Professions in Jamaica, N.Y. in 1975. Upon completion, he proceeded to the University of Texas where he received his Pharm.D. jointly conferred by UTA and The University of Texas Health Sciences Center at San Antonio in 1979. Also, he completed a residency in Psychiatric Pharmacy from the Texas Department of Mental Health and Mental Retardation that same year.

From 1979-1982, Dr. Bryant worked as Clinical Coordinator of Pharmacy Services at The New York Hospital-Cornell Medical Center in Manhattan. Upon relocation back to Texas in 1982, Dr. Bryant rose through the academic ranks from Faculty Associate to tenured Professor of Psychiatry & Behavioral Sciences at UTMB, being the first individual in psychiatric pharmacy to obtain such a position.

Dr. Bryant is a Founding Member of CPNP and has served the College over multiple decades while rarely seeking the limelight. He has served as Chair of the Public & Professional Affairs Committee in 1998 and has served as a member of that same CPNP Committee until very recently. Currently, Steve is active on the Planning Committee for the Annual Northeastern Psychiatric Pharmacy Symposium. In addition, he volunteers at The Albany Damien Center that provides much needed services to those in the community infected and affected by HIV.