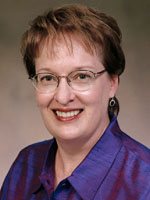 The 2003 recipient of the Judith Saklad Award is Martha P. Fankhauser, M.S. Pharm, FASHP, BCPP. Fankhauser presented the Saklad Memorial Lecture at the 2003 CPNP Annual Meeting. The title of her presentation was "So Many Beautiful Minds: Are There Enough Neuropsychiatric Specialists to Do All of the Work?".

Martha (Martie) P. Fankhauser, received a Bachelor of Arts degree in biology in 1972 and a Bachelor of Science degree with distinctions in pharmacy in 1974 from the University of Kansas. In 1982, Ms. Fankhauser completed the Master of Science degree in hospital pharmacy at the University of Arizona and a one-year specialty residency in psychiatry. In 1997, she became a Fellow of the American Society of Health-System Pharmacists (FASHP) and was Board Certified in Psychiatric Pharmacy Practice (BCPP) in 2000 by the Board of Pharmaceutical Specialists.

Ms. Fankhauser is clinical Associate Professor in the Department of Pharmacy Practice and Science at the University of Arizona College of Pharmacy in Tucson, Arizona. She has worked at the University of Arizona since 1982 and has been the program director for the ASHP accredited specialty residency program in "Neuropsychiatric Pharmacy Practice" since 1993. Martie has trained 10 pharmacy specialists in the residency program and is a preceptor to over 20 Pharm.D. students each year in the psychiatry/neurology clerkship program. Martie has been involved in coordinating the Annual Neuropsychiatric Pharmacology Update in Arizona since 1994 and is actively involved in giving presentations on neuropsychopharmacology in the state.

Ms. Fankhauser has served as the chair for the Specialty Council of Psychiatric Pharmacy Practice (ASHP) and as the chair for the Specialty Council of Psychiatric Pharmacy Practice (BPS). For CPNP, Martie has served as a member of the Regional Programming Task Force and the Recertification Committee. She received the Clinical Pharmacy Educator Award at the College of Pharmacy in 1988, 1993, 1997, and 1999 and numerous mentoring awards for the clerkship program. In 1997, Martie received the Innovative Pharmacy Practice Award by the Arizona Pharmacy Association for her work in mental health facilities. She is a consultant to the Department of Developmental Disabilities, the Arizona’s Children Association, and CODAC Behavioral Health Sciences. She has served on the Board of Directors for the Tourette Syndrome Association of Arizona and is actively involved in educating professionals on the pharmacotherapy of Tourette disorder and associated behaviors. Martie’s primary interest is in the ambulatory care of neuropsychiatric patients and in consulting on difficult-to-treat patients and those with co-morbid medical and psychiatric disorders. Martie’s clinical and research interests include autistic disorder, Tourette’s disorder, eating disorders, women’s mental health, premenstrual dysphoric disorder, geriatric psychopharmacology, pain management, anxiety disorders, mood disorders and substance abuse disorders.