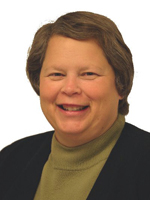 Dr. Richards has been in her current position since 1984. During her tenure she has been involved in implementing IV Admixture Services, Unit Dose Drug Distribution, Robotic Drug Distribution and computerized prescriber order entry at the San Antonio State Hospital. Agency-wide she has been involved in implementing pharmacy distribution software and a new drug purchasing system that includes use of a group purchasing organization and a wholesaler. Her current project is the implementation of an electronic medication administration record along with bed-side scanning of medication administration at the San Antonio State Hospital as well as the other state mental health facilities.

As a founding member of CPNP, she has served on the Board of Directors as a Member-At-Large and will become President-Elect in July. She has served on the Program Committee for the past two years. Over her career, she has been involved with many professional activities. She was a member of the Specialty Council for Psychiatric Pharmacy for the Board of Pharmaceutical Specialties and served as both Chair and Vice Chair for the Council. For ASHP, she has served on both the Interim and Executive Committee for the Clinical Section, as well as the Advisory Group of the ASHP Section of Clinical Specialists. She also served as Chair and Vice Chair for the ASHP Psychopharmacy Special Practice Group. Twice, Dr. Richards was a finalist for the Texas Department of Mental Health and Mental Retardation Preston E. Harrison Award for her activities in Pharmacy Services within the agency. In 2001, she received the ASHP Best Practice Award for “Improvement in the Medication Use Process at San Antonio State Hospital.” Recently, she was appointed to serve on The Joint Commission Professional and Technical Advisory Committee for Behavioral Health Care. She is a member of Texas Society Health-System Pharmacists and Kappa Epsilon.